How to get a proof of onward travel without buying an actual ticket?

What is an onward ticket?

An onward ticket is a flight reservation or airline itinerary. It basically looks like a regular airline ticket with valid PNR / booking code or booking reference number. They are verifiable on the airlines websites if checked using the “Manage my booking” tool found on most airline websites.

What is an onward ticket used for?

The main use of an onward ticket is for proof of return (for one-way flight) to show at the immigration while traveling. That means you can show that you have fixed travel plan to leave the country which you’re hoping to enter. They won’t necessarily care where that ticket goes, just as long as it’s out of their country. In some countries, onward ticket is required by immigration, the airline at the check-in and won’t allow you to board the plane without it.

Which Countries Require The Onward Ticket?

Before you get too excited thinking that your destination won’t ask for an onward ticket, just know that even though it’s not in their laws, they probably will. As a precaution, always book an onward ticket before travelling to any country.

How To Get A Proof Of Onward Travel?

It’s simple, if you already have an actual one-way ticket (let’s say Paris to Singapore ) then you’ll need an onward ticket to show as proof of return at the immigration or before getting in the plane. The onward ticket could be Singapore to Paris, or Singapore to Bangkok. In other word it’s a proof that you can show that you are leaving the country before the end of your visa.

On our website you can get such a ticket for only $10.00. Simply enter Singapore as Departing Airport ( From ), Bangkok for Arrival Airport( To ), and pick a Departure Date that is before the expiration date of your visa. Once payment has been made, onward ticket will be sent to your email within 5 – 60 minutes. You will receive a perfectly legitimate flight PDF-ticket with a valid PNR code under your name that you can print it out as a proof of your onward travel. You can check the validity of your onward ticket on major airline’s websites. 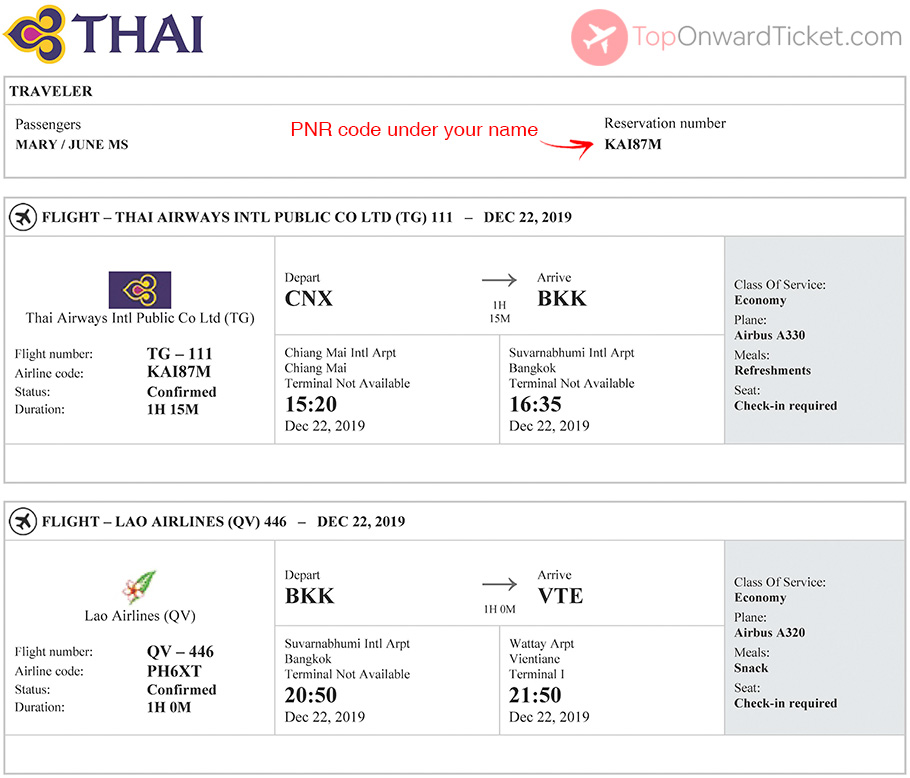 How does Top Onward Ticket Work?

We are providing onward ticket for proof of return (for one-way flight) without buying actual flight ticket.

Please note: These are onward tickets, not actual tickets.

Can I use my onward ticket to fly?

No, the tickets are to show the check-in staff that ask you to see an onward flight or for visa applications.

Easy: We made the process as simple as possible.

Real: We make a 100% real legit booking. All our onward tickets come with a unique reservation code (PNR) that you can use to check the validity on major airline’s websites.

Money-back guarantee: If you’re not satisfied, we don’t expect you to pay. That’s our commitment & your guarantee.

Global Customer Service: Get assistance for any questions you have with a speedy response times with our live chat.

Can I see a sample reservation?

Of course, click on the link below to see a sample.

Are your onward tickets real and verifiable?

Yes, we are providing a 100% legit and verifiable onward tickets to our customers. All our onward tickets come with a unique airline reservation code (also known as PNR) that you can use to verify or look up on airline’s websites. Tickets are created by a registered travel agent.

Note: Some airlines systems do not display external bookings made with GDS. In such cases, you can use verification sites such as Travelport ViewTrip.

How soon can I get my onward ticket?

Your onward ticket will be sent to you as a PDF attachment via email within 5 – 60 minutes. You can choose to receive your ticket on a later date. Your order will be in your inbox on the date of your choosing.

Get assistance for any questions you have with a speedy response times with our live chat.

How long is the onward ticket valid?

Our onward tickets are valid for 48+ hours.

In rare cases onward ticket can also be canceled within few hours or 24 hours. In this situation we will create a new ticket for you and it’s free of charge.

When should I order my onward ticket?

Ideally, from 12 to 24 hours before your flight.

We also provide you with the option to receive your onward ticket on a later date.

We will create a fresh ticket for you on a date of your choosing.

Do I have to cancel the flight? Are there any cancellation charges?

No, you don’t need to do anything. It will be automatically cancelled by us. We will not charge you any cancellation fees.

Will I expect any additional charge other than the amount I paid for my order?

No. The amount you paid for your order is the only charge.

Your purchase at www.toponwardticket.com comes with a 100% money back guarantee. That means that if you don’t like Top Onward Ticket for any reason, we will give you a full refund. Requests for refund must be made within one day of purchase. We are confident in the quality of our service and you can be confident in us.

Can I get an onward ticket without buying the actual ticket?

I don’t have a PayPal account. Can I pay using credit card or debit card?

You don’t need a PayPal account to order. Just click “Pay with a Bank Account or Credit Card” at the bottom of the page and enter your credit card or debit card details.

Pay with debit or credit card 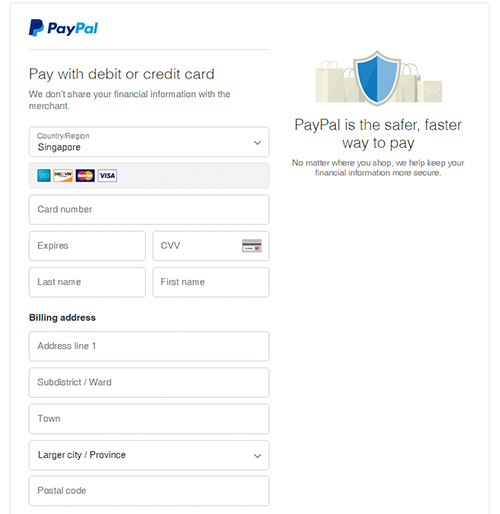 How secure is your payment gateway? Do you store my credit/debit card details?

We use a safe gateway payment from PayPal, the international leader in payments solutions on Internet. PayPal is a totally secure service that allows buyers and sellers to trade without knowing each other’s bank details.
All transactions are secured by SSL (the method of data encryption most used in the world).

When you enter your PayPal account or your card details, the data is instantly encrypted in your computer before being sent to the server of PayPal.
Your security is important to us and we will never store your credit card information.

Can I have a separate onward ticket per passenger?

If you’re ordering for 2 or more people, you can definitely choose if you want all your names in one ticket or separate onward ticket for each one of you. No problem.